Xlabfactory was founded in 2004 to promote a performance art as near as possible to the digital themes: immediacy, hypermediality, and interactivity. The authors define this experimental project as a techno recitar cantando: it concerns the conjunction of interactive systems with live performance in which computer technologies play a key role rather than a subsidiary one in content, techniques, and aesthetics.

The computer has become nowadays a significant tool and agent of performative action and creation: cyber theatre is also a metaphor for an anthropological evolution of the body in which the machine and the human can co-exist, and for the theme of the Fleeting Identities of today: machines as theatrical masks. As a matter of fact the sense of technology has transformed or destabilized notions of liveness, presence and the real; digital performances could define a turning point for theatre, can invent new narrative forms [1].

Interactive technologies enable the arts to regain that famous unique aura, that hic et nunc cancelled in the passage to the means of communication and reproduction, as Walter Benjamin explained in The Work of Art in the Age of mechanical Reproduction(1936). Performance art, unlike cinema and photography which were born as reproducible media, is a unique production which is different and unrepeatable each time, based on the interrelation between audience and public and based on a synthesis of various languages [2].

Immediacy, interactivity intermediality are theatrical themes and they come up renewed in a digital and virtual perspective because the media arts establish a new age of the real: the notions of environment, interaction between agents and event unite digital multimedia and live performance [3].

Mandala’s Tales is a special live theater that incorporates videos and sounds, animations and text in form of hypertext that have been digitally created, processed or manipulated, and it also introduces interactive systems. Mandala’s Tales is a pioneering artistic project born in 2000; it has changed technologies and modality of interactivity three times since then.

– the transformation of dramaturgy

– the transformation of the actor

– the transformation of the scene

We wanted to unite the most ancient narrative form, that oral story telling spoken in the ancient days in a circle around a fire, by the representative of the collective consciousness, the person who took care of the imaginary, of the memory, of the tradition of the community with the most up-to-date art form: the technological one. The author tried to mix the mythological and technological.

The symbolism of mandala was ideal to represent this union and also the necessity of a guide in an era like ours, full of confusion of identity. Mandala is a Sanskrit word and it means sacred or magic circle; Carl Gustav Jung studied it and explained the archetypal and universal significance of mandala. In synthesis, the plot which is rich of an oniric and fabulous atmosphere, is this: Karl is a child who live in a metropolitan city, he has magic powers, is a video game master; he loves a negro princess Riza from a noble African family. From their union a hermaphrodite was born, half a male half a female, half a human half a divine being in which the opposites unite together, the differences coexist.

The actor becomes a shamanistic figure, has a magic role to guide the audience inside the collective imaginary, inside archetypal symbols; a guide role nowadays occupied by the mass media, unfortunately. The authors wanted to immerse the audience in a tale based on sounds, words, and images in constant transformations thanks to the digital technologies; the performers become digital storytellers or cyber-rhapsodists. We wanted, in fact, to create a synthesis of languages and this is possible with the digital system, ie, it’s possible to achieve the ultimate utopia of the avant guard from Wagner to Kandinski, the concept of the total art work.

Mandala’s Tales is based on hypertext written by Andrea Balzola [4] with seven stories that are interlinked; every story touches the other characters in different moments and ways; it’s the first Italian theatrical hypertext, created in the first version, more than ten years ago. We have calculated that 5.040 stories are possible in a new combinatorial narration, no longer linear but simultaneous and labyrinthic. In the vertical sense you can see the chronological story of the seven characters but there are several links that join one to another in a horizontal sense that produce a sense of infinity.

In the first version of the show the choice of the path, the choice of the character’s point of view was given to the audience and the interactivity system was Mandala System created in the 80’s by the Canadian group Vivid; it’s one of the first experiences of non immersive virtual reality, an archaic motion capture system which allows the digitalizing of objects shot by a video camera in real time such as a lumakee, and the objects come onto the laptop screen becoming interactive, generating sounds, and graphic signs. The digital story teller was Giacomo Verde. Here is one of the first exhibition:

From Mandala System to a new up to date version: in 2008 we decided to convert the interactive modality and the performer was a singer, a contemporary soprano, Francesca Della Monica. In this new version, Mandala’s Tales is an interactive technological play, in which digital signals blend with an all embracing environment where a score composed of words, sounds, gestures and images form an hypnotic mandala. The vocals and body gestures of the “metamorphing” performer Francesca Della Monica trigger a flow of images and sounds that are activated and transformed to illustrate the hypertext written by Andrea Balzola.

A data suit is the digital costume for the actress: composed of sensors is at the centre of the generation of the digital audiovisual actions, which are based around an interactive score created by the composer and electronic sound designer Mauro Lupone. Video Artist Theo Eshetu has created visuals that illustrate and counterpoint the abstract narrative of the play. With a style that combines an original singing recital with the language of mythology, the play deals with the themes of Time in the technological age, of an interior quest, of generation and death through the narration of characters, the body and stories with powerful symbolic connections.

Francesca Della Monica activates video and audio sequences directly controlling all the scene via an array of arm, and body sensors attached by wireless to an offstage computer. See photostream.

Thanks to data suite with sensors, she activates the screen video imagery, controls video camera effects by ARKAOS software, processes and modifies in real time her voice and the sound electronic environment via MIDI through MAX MSP programme. All by shaking her body, by gesturing with her arms (wrist, elbow, shoulder) to create a mandalic animated universe.

The performer must have many memories: memory of cantos, memory of score, memory of the texts, memory of the gestures, memory of sounds, memory of images around her. But she can improvise inside these structures freely. Sensors reading the movement of her arm, the variation of parameters, send wireless electronic signals which an analogical-digital conversion card transforms into midi signals. They also allow real-time sound and image modification with a processing of her voice. She becomes a kind of orchestral conductor, a kind of “synthetic actor” or “hyperactor”. 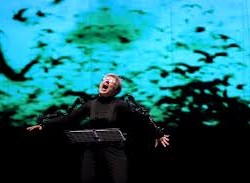 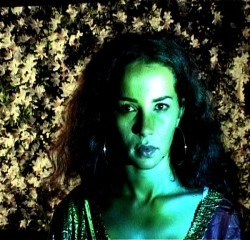 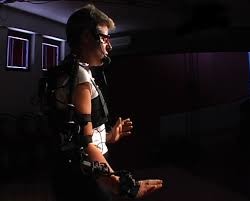 In Mandala’ tales one arm makes the videos play, generates effects real time by Arkaos, an open source software used by Vjing for live media concert. The other arm triggers the sounds in three ways through MIDI system, via patch MAX MSX, creating this way the ideal electronic universe and artificial environment for the story:

Francesca Della Monica underlines that the show works in two different vocal range: the one linked to myth, the other to the story telling. They are two parallel planes to interpret. In fact when she sings as a story teller she uses a restricted vocal range, from the point of view of the frequency, of the harmonic research; on the other hand for the mythological section the vocal range becomes wider, reaching paradoxical frequencies, disharmony, noises, without harmony or intonation: it was suitable for interpreting the realm of the not human, as you can see in the birth of hermapfrodite.

One of the most emblematic sections for the use of gesture, voice, sensors, electronic environment is the impossible dialog between Karl and Riza.

The performer is solo but not alone: she can trigger video effects (for example, fading effect) making the characters appear or disappear with a single gesture of the elbow: significantly at this point, the voice of the performer becomes double, the male and female together. This backwards and forwards movement of the arm changes the sense of the actorial signal deeply. A specific movement of the elbow unmistakably indicates one character or the other, but it is also very expressive, near the heart, emotively connotative. Also the Italian playwright and director Dario Fo in the very famous monologue Mistero Buffo, uses a gestural code to indicate different characters. But here the movement is necessary to activate the visual and audio effects also.

Therefore, we can consider that the actorial gestures of Francesca Della Monica have

a physical value (the dance of the body on the space),

a psychological value (the expression of a sentiment)

a code value (it activate an audiovideo system)

A vocal researcher like Francesca Della Monica has been inspired by this synesthesia made possible by new digital media, from all different input from audio and video; it helps to amplify the vocal universe, to enlarge the sense of artistic identity. As the data suit becomes a second skin, a real body extension, the performer can improvise with it as with a musical instrument.

The Canadian director and actor Robert Lepage said that the actor who plays in a technological environment must have a “peripheral vision but also a global consciousness: Man is the centre of the tecnology” [5]. The digital presence in this emblematic case study enhances the potentiality of the theatrical human action in which technology has become one of the languages of the complex dramaturgy, and is not a pure parameter controlled by a machine only.

The story telling leads to the birth of a hermaphrodite, an alchemic perfect being which unites the female and male principle. The result of this performance is also a hybrid, something ambivalent, to use a definition of Zygmunt Bauman [6], something that unites the liveness of the theatrical event and the potentiality of the digital media, the corporeity of theatre and the immateriality of the digital.