Alex trained at Wimbledon School of Art, graduating in 1997. He works extensively in the UK and Europe, especially designing new writing and ‘Live Cinema’ work in Germany and France with director Katie Mitchell.

He has worked at the National Theatre, Donmar Warehouse and the Royal Court in recent years and has expanded his scope in 2016 designing Verdi’s Falstaff in Shanghai (Chinese premiere), and Verdi’s Macbeth in St Louis, USA.

Alex is based in London, working at the multi-disciplinary studios 401 ½ Studios in Stockwell. He continues to design for dance, theatre and opera 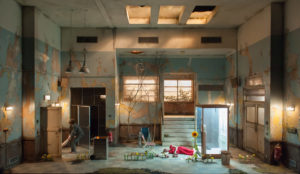