“Powwow” was performed at the closing of  “Motive for peace” exhibition, which brought  together over 60 works devoted to an anti-war agenda.

40 parallel laser-like beams along the 130 meters of the viaduct ­­symbolized  the dialgue. The powwow.

The sound of analogue synths and drummachines travelled together with the light across the viaduct. Chaotic rythms argued with each other at the beginning, gradually  merged  into one structure, and finally, augmented with more and more new instruments, culminated into one harmonious flow. 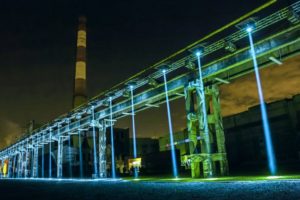