The Soul, the Last Frontier

Are there UFOs? In the beginning, Vyrypaev assures us that yes. He knows it: he crossed the entire world in the search of people who guarantee us that they have seen them. It is only about respectable people, professionals, students, mothers, professors, scientists, businessmen. Whom he discovers all over the world, in Australia, Russia, the United States, England etc. Each of them recounts his experience, the way he perceived this encounter. How and where did they meet? In the most different places, in a bar, on a terrace, on a river bank. The encounter is a profoundly personal experience; it cannot be shared, nor conveyed.

What are UFOs like? Do they have a certain shape, do they communicate in a certain way? No, there is nothing concrete, visible. It is a moment of loss of consciousness, a detachment from the body, from the sensory world we are accustomed to, it is an illumination, a loss of oneself, an inexplicable emotion, a momentary disturbance. To come out of oneself, to break the barriers of daily perception, to penetrate into a completely unknown dimension.

For Vyrypaev, each of these encounters is a journey into the inner being, a discovery of unexplored territories, an opening towards spirituality, which seemed unattainable.

Theatre remains, fundamentally, the enounter with ourselves. But because it is easier to travel through space than finding the path to oneself, the show UFO, directed by Bobi Pricop, becomes a sort of sensory-digital circuit, through the cosmos of our unrest. Here, the soul is the last fronteer. 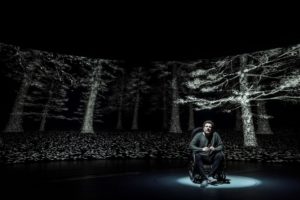 An enactment breaking its own conventions, turning reality into the supreme artifice, and the soul into performance.

The storytelling mechanisms employed in the show rely on last-generation technologies, but integrated into the drama of the natural, in a hi-tech artistic installation of emotions expressed on several levels, at all levels of life, perception and reality.

It is the experience-show we need when we forget about ourselves, due to the surrounding noise, but also a game of docu-mystification, of green humanoids, alien civilisations and the peace of a cloudless morning.

UFO is the second show staged by Bobi Pricop at NTB (in a national premiere), after The Curious Incident of the Dog in the Night-Time, distinguished with many awards and it is his second enactment after a text by Vyrypaev – „Illusions”, which premiered in 2015 at the „Marin Sorescu” National Theatre of Craiova.

The National Theatre is located in downtown Bucharest, on street intersection between Nicolae Bălcescu Boulevards, I.C. Brătianu Queen Elizabeth and Charles I.