Ishikawa Watanabe Laboratory at the Graduate School of Information Science and Technology, The University of Tokyo, and Tokyo Electron Device Ltd co-developed a high-speed projector capable of projecting images with a frame rate of 1,000fps.

The projector has an 8-bit color scale (256 levels) and a resolution of 1,024 x 768. When combined with a high-speed camera having a frame rate of 1,000fps, it is capable of projection mapping on a fast-moving object.

It recognizes an object in real time with the high-speed vision technology. And an image is projected on the object by the high-speed projector. It takes three millisecond to project an image (lag time).

The projector realizes the high-speed operation for a frame rate of 1,000fps by adding original control techniques to Texas Instruments Inc’s DLP (digital light processing) system. The DLP is an optical engine using a DMD (digital micromirror device) that is made by using a MEMS (micro-electric-mechanical system) to form many micromirrors on a silicon chip.

It takes images by changing the orientation of each mirror and turning the irradiation of reflected light on/off for each pixel. It has already been widely used in projectors for use in homes and movie theaters. But their frame rates are usually 30-120fps. 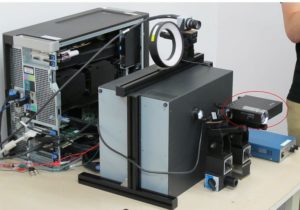 This time, to realize the frame rate of 1,000fps, a new driving technology was developed mainly by Tokyo Electron Device. There were some challenges. For example, when the orientations of micromirrors on the DMD were frequently changed, the mirrors did not go back to desired orientations. The company solved such problems to make commercialization possible.

For the fast-speed operation, a control circuit embedded with an FPGA was newly developed. Also, an original communication interface for high-speed transmission of image data was newly employed.