Interview to Konic thtr about their videomapping creation in Alghero, Torre della Maddalena
412

“Torre dei Sogni” is a visual poem to be screened on the ‘Forte della Maddalena’ (Garibaldi Tower), one of the most beautiful and important architectural monument of Alghero. A small tribute to the dreams that take us back to the Neolithic world, goddesses and warriors, costumes and‘mamuthones‘ masked faces. And that commemorates the essence of the rich and complex Sardinian culture. It is part of the EU project IAM; Koniclab is a thatrical and multimedia company founded by Alain Baumann and Rosa Sanchez. 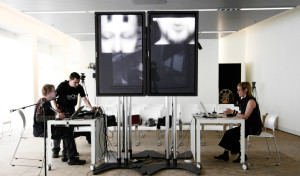 AMM. About which subjects, topics did you work for the videomapping in Alghero in the frame of IAM project?

KONIC thtr: The piece was prepared for Torre della Maddalena also called Garibaldi  Tower, an architectural landmark of Alghero in Sardinia. Alghero is a fortified city on the seaside, protected by walls erected during the sixteenth century. The tower is a circular bastion that is part of the walled fortification surrounding the city, and is located on what used to be the Customs dock in the harbour. It is a tower for defense and security, facing the sea, and it was built with the purpose to protect from the extraneous and  foreign. Therefore we conceptualize the building as a catalyst or osmotic filter displaying Sardinian cultural references.

We were interested in showing Alghero as part of a culture of cultures on the island of Sardinia. For this purpose, we extracted and synthesized some key eras, which we considered as important and this gave the structure to our projected audiovisual work. In the script there is a narrative journey through time, allowing us to establish a relationship of continuity in some cultural key  elements in which the Sardinian audience can (hopefully) recognize themselves. Here I explain briefly why I chose those elements and how I interpreted them. The most relevant elements of the script structure are: the prehistory, the Sardinian Carnival, the traditional clothing, the sea and coral. 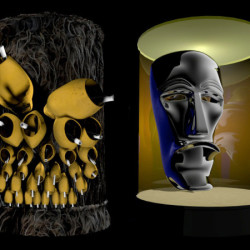 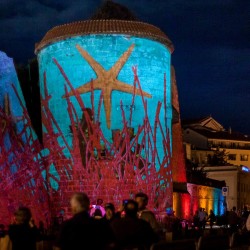 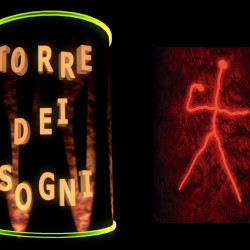 The Sardinian prehistory is an important period and some elements and symbols of that time have persisted and are still present nowadays, with their evolution through time. In the Prehistory section, we reference the pre-Nuragic culture of stone, the Neolithic burial sites carved into the rock and the characters who have remained in the Sardinian popular tradition in the form of legends. The domus de Janas with red ocher paintings and engravings, and small Janas figures and mother goddesses, associated to the funerary context.

From the Nuragic civilization of the Bronze Age, we kept the characteristic nuraghe towers, built out of large stones and applying the principle of false dome, as its shape is closelly related to the one of the tower. The Nuragic culture also produced the enigmatic sculptures of giant stone warriors and the votive elements in form of small bronze warrior figurines.Warriors and navigators, with an agropastoral economic system, we can establish relationships and bridges from these ancient cultures to the Sardinian carnival characters, also shown as shepherds and farmers.

In the video, after the Nuragic warriors we present the Rite of Sardinian Carnival. Some authors establish the origins of Carnival of Mamoiada in prehistory. This Carnival is one of the most famous events of folklore of Sardinia. It is also known as “ Mamuthones Dance ” and its transmuted and powerful characters are the Mamuthones and Issohadores, carrying for their dances archaic black masks and whose dress consists of black sheepskin and thirty kilos of bronze cowbells. The ritual is not a festive one, but rather gloomy, based on the idea of death and rebirth, a rite of celebration of Dionysus, Greek god of vegetation and ecstasy, who dies and is reborn each year in the natural cycle of eternal recurrence. With the death of the God, for a while also does the fertility of the land die. Carnival masks and ancestral dances take us to another representative element of Sardinian culture, which are traditional costumes. Also from the origin of the agro-pastoral tradition, the rich and varied shapes, colors and embroidery serve as identity element, differing in each town it will show the group or community one belongs to. We end the projection with a reference to the sea as the tower looks to the west and to the sea, and for centuries the rays of the sunset have reflected the sea onto its walls. And the Coral as a distinctive feature of the island, an important part of the Sardinian economy and whose red color connects with the ocher of the pre – nuragic paintings

AMM.: Sardina is the land of the ancient masks, Mammuthones with an antropologic (and theatrical) value. Could you define videomapping a sort of modern mask  having something to do with mutability, metamorphosis in that arcais sense?

KONIC thtr: I agree with you. The tower is understood as a skin, a fragile membrane that separates and unites life and death. And the mask do fulfill very well this role of an element that can achieve the mutability, transformation and metamorphosis. The mask, the other side, the other identity or representation, has been used since the Paleolithic by most human groups across time. The mask disguises, hides and / or reveals the identity of who wears it. We have worked with the personification of the tower, the building, humanizing it by giving it a human shape. It is body and it is also character. It becomes the main, mutable character of the audiovisual show which is being staged. The tower, the building itself, becomes the bearer of the mask. The rationale behind a mask is that it will be inhabited by spirits or by others, that is, the identity in the user of that mask will change. When in use, there is a loss of their previous personality as the new one is acquired. When the magic or religious ceremony becomes theater, the mask allows the actor to go beyond their humanity and become a mythical character, leaving aside completely his/her own personality. A key role in the mask is to give a sense of continuity, of unity between the present and the beginning of time.

Videomapping allows us to make these qualitative transformations through image and sound, almost instantly, offering cultural references that the audience can identify. In this sense, the videomapping event takes a role of mediation comparable to the role of the mask in theater and in the rituals, a mediation that is done for, and with, the audience.

AMM.: Your videomappings have always an iconographic force and great visual impact; do you think that the media narration in videmapping has a restrictive format, rules, grammatic to which one needs to obey?

KONIC thtr: Yes, you could say that it has a restrictive format, partly due to the aesthetic criteria of those leading this expressions and artistic interventions. There are certain trends that show videomapping as what I could define behavioral or linear, understanding architectural videomapping as a display of effects produced with and upon the image and structure of the facade. This criteria, based on mimicry, from my point of view has a restrictive approach and library of available effects, and tends to deplete the poetic of the interventions by playing with an aesthetic model based on visual effects and sound that the public recognizes and is waiting for. From my point of view, and this is how I apply it, the architectural mapping has to understand the building onto which it intervenes, not only as a facade around the building but also as the context into which it is located, its history; bearing in mind that we are working with heritage buildings or sites. And what do videomappings provide to these iconic buildings with a great symbolic meaning for the citizens of that city, who know them and consider them as something relevant to their culture?What can we bring with a visual intervention on their surfaces? There is still much work to do, luckily, still a lot to be explored and understood, and the rapid evolution of the technologies involved can also to help us find new solutions and criteria for the artistic intervention in public spaces.

AMM.: Which are your next digital works?

KONIC thtr: We are currently working on a small scale stage project called Hypernatural in which  we use micromappings on stage to bring the set to life. Hypernatural is a site specific creation for dance, music and moving image. A show that explores our relationship with what we understand as nature through our links with color, light and objects. The interactive mapped images, the light and the sounds will be the support with which we will narrate our relationship between ourself, architecture and landscapes.