MoMAR. An unauthorized gallery concept aimed at democratizing physical exhibition spaces, museums, and the curation of art within them. MoMAR is non-profit, non-owned, and exists in the absence of any privatized structures.

The first exhibit: “Hello, we’re from the internet” consists of eight artists and will be overlaid on top of existing artworks hung in ‘a museum’ of modern art in New York using Augmented Reality.

Join us on March 2nd for the very first exhibition. If not simply to see the artworks themselves, we invite you to engage in the oncoming conversations and consider the bigger pictures that surround them.

The project is open source, instructions readily available on momar.gallery/opensource and very much open to the public. 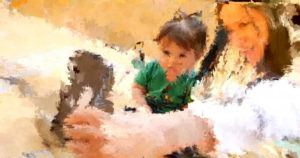 This second AR exhibition is the first solo exhibition presented by the group, and it highlights the work of David Kraftsow. The eight artworks in the exhibition are generated by a Twitter bot Kraftsow created called youtube artifact. The bot currently generates a new image every four hours and posts its creations on Twitter.

To generate each image Kraftsow’s algorithm lets the bot pull a specific video off YouTube, which is found through a convoluted set of parameters. Then, using a technique called datamoshing, the bot generates a still image from the video, with specifically introduced coding errors creating an impressionistic swirl of colors.

In describing the exhibition the MoMAR introduction asks, “If the role of art in society is to incite reflection and ask questions about the state of our world, can algorithms be a part of determining and defining people’s artistic and cultural values?”

This isn’t the first time AR has invaded an art gallery, but the unauthorized nature of MoMAR certainly points to some compelling possible future uses for the technology. The ability to reclaim spaces that have classically been prohibitively controlled suggests an almost anarchic deconstruction of traditional environments.

Welcome to The Age of the Algorithm. A world in which automated processes are no longer simply tools at our disposal, but the single greatest omnipresent force currently shaping our world. For the most part, they remain unseen. Going about their business, mimicking human behavior and making decisions based on statistical analysis of what they ‘think’ is right. If the role of art in society is to incite reflection and ask questions about the state of our world, can algorithms be a part of determining and defining people’s artistic and cultural values? MoMAR presents a series of eight pieces created by David Kraftsow’s YouTube Artifact Bot. 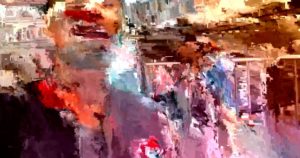 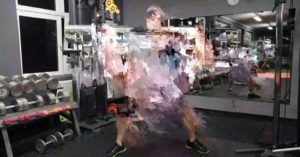 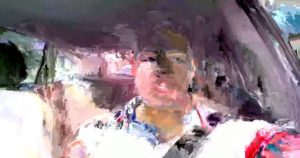 David Kraftsow
David Kraftsow is a programmer and artist based in New York. His recent work focuses on generative art. His projects have been exhibited internationally at The Tate Modern, The Museum of the Moving Image, Babycastles, Electric Objects, Nikolaj Copenhagen Contemporary Art Center, and a yoga studio in Park City with DJ A-Trak. He has been featured in numerous media outlets including Wired, The Atlantic, NHK Television and Entertainment Weekly.
Also, Pee-Wee Herman and Coolio have tweeted about his work.
Link