As celestial beings descend to Earth vitiating its population, the world’s order unbalances. Initiated by these terms, a tragic fall leads to the parturition of crucial opposites: Hell and Heaven’s circles.

Boris Labbé got the inspiration for his film from reading Dante’s Divine Comedy, but it isn’t an adaptation. In fact, the work gives a sensation of being an amplified imaginary creation that draws upon art, myths, and the history of mankind. The artist was clearly influenced by Bosch’s The Garden of Earthly Delights, Bruegel’s The Fall of the Rebel Angels, Botticelli’s illustration of Dante, Goya’s The Disasters of War and Henry Darger’s In the Realms of the Unreal. With La Chute Boris Labbé continues his experimental research with a new sense of narrative, and pursues his work around loops, metamorphoses, and the intertwined processes of degeneration and regeneration.

The artist uses traditional techniques combined with computer composition editing. The animated sequences consist of Indian ink and watercolor drawings on paper (21 x 30 cm), approximately 4,000 original drawings were needed to create the whole film. The multilayered compositing as well as the camera movements were made with After Effects during the process. Boris Labbé works with a small team of artists, technicians, and animation students who help him to assume this laborious and non-conventional working process. Parallel to the animation process, the musical composition was created by the Italian composer Daniele Ghisi. He’s worked with database existing music, mainly string quartets, edited digitally in a complex multilayered electronic music composition. 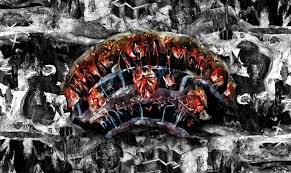 Boris Labbé (FR)Boris Labbé (FR). After obtaining a DNAP (National Diploma in Visual Arts) at the School of Art and Ceramics in Tarbes, Boris Labbé continued his studies at EMCA – École des Métiers du Cinéma d’Animation in Angoulême, where he produced numerous projects, including Kyrielle, awarded with the Special Jury’s prize for Graduation Films at the Annecy International Animated Film Festival in 2012. Simultaneously, he developed his work as an artist and film director. He spent one year as an artist member at the Casa de Velázquez in Madrid, Academy of France in Spain. Later on he started his collaboration with Sacrebleu Productions and directed the short films Rhizome (2015), which was awarded the Grand Prize at Japan Media Arts Festival in Tokyo, and the Golden Nica at Prix Ars Electronica in Linz. La Chute (2018) was selected for special screenings at the 57th Semaine de la Critique, Cannes Film Festival.

Graphic artist from his beginning, Boris Labbé has been developing, over the last eight years, an approach in animated video. Experiment after experiment, the film he develops tend to leave the spatio-temporal pattern imposed by the classical cinema, evolving towards video installation devices that include major technological revolutions of the past century, crossed with the latest digital technology generations. All his videos, like a part of the experimental film heritage have the emblem of the palingenesis, concept making both appeal to the loop and regeneration : cyclical return of the same events ; regular reappearance of ancestral characters ; perpetual return to life.

Boris Labbé was born in 1987 in Lannemezan (Hautes Pyrénées, France).
He lives and works between France and Spain (Madrid).
He studied at the School of Fine Arts in Tarbes (ESACT) and in the school of animated film in Angoulême (EMCA) until 2011. Then he was member of the Académie de France in Madrid, as resident at the Casa de Velázquez (2011-2012). After that he was in residence at the HEAR – Haute école des arts du Rhin (oct – dec 2013), as well as at CICLIC Région Centre (apr – dec 2014), and in ESCY in Yssingeaux (nov 2015 – apr 2016) in partnership with the DRAC Auvergne and VIDEOFORMES.

His work has been shown in contemporary art exhibitions in France, Spain, Canada and Japan as well as in over one hundred international film and video festivals.
He received many prizes for his work, so as the Special Jury Prize at the Annecy festival in 2012 forKyrielle, the prize for the Best video installation in roBot festival in Bologna and in the Multivision Festival in St. Petersburg for Danse macabre (2013) among others.
This video installation, exhibited in Montreal (March – May 2016), is now concerved in the Cinémathèque Québécoise collection.

At last, after a short tour around the world and several distinctions in renowned festivals (Annecy, Fantoche, BIAF, CutOut Fest, Stuttgart…), his latest short film Rhizome (2015), produced by Sacrebleu Productions, has been awarded by the Grand Prize at Japan Media Arts Festival in Tokyo and the Goden Nica Animation at Festival Ars Electronica in Linz.