ELEMENTS OF OZ (in development) by The builders association
310

Our new performance draws on one of the richest examples of escapist American entertainment, The Wizard of Oz. The Builders will bring their own brand of magic to this story, expanding our stagecraft by adding virtual elements to the physical environment through the use of augmented reality (AR) and smartphone interactivity. To engage the Land of Oz in contemporary life, there’s no better place to begin than a viewer’s smartphone. Increasingly, we live our daily lives through this tiny interface and in some sense we depend upon these devices to escape our humdrum environment and to live out other fantasies. 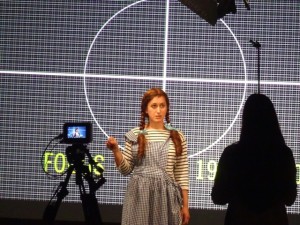 We are developing an AR app which will instruct viewers to use their ‘smart’ devices to engage with the performance. In the theater, the audience will see a spare stage, but with the use of AR in their smartphones they will see the fantastical world of Oz, from the poppy fields to the Emerald City. These devices will be the gateway to fantasy, in much the same way the classic MGM movie The Wizard of Oz transported us from the stark black and white of Kansas to the vibrant Technicolor Land of Oz. Using a simple, almost empty stage and a few powerful performers, this project presents a double-edged sword by staging a robust dialog between the analog and the virtual. Theater has traditionally celebrated live performance and is born from the idea that people come together to witness a live event onstage. But what happens if the performance, while live, cannot truly be ‘seen’ without Oz’s fantastical devices? We aim to provoke an awareness of our dependence on these devices – necessary to enter the “Land of Oz.“

The production will tell the story of Oz by tracing some of the fanatical allegories which have been conjured since the book’s publication. These interpretations have ranged from the idea of the Tin Man as America’s unemployed industrial workers and the Scarecrow as the Midwest’s confused famers; or the Wicked Witch’s “poppies” as the drug trade; or the 1890’s struggle between the Populist Silverite movement (the Munchkins) and the gold-driven bankers of the East (the Wicked Witch) and their battle over America’s establishment of a monetary standard; or the longstanding urban myth that the Pink Floyd’s album Dark Side of the Moon is actually a soundtrack for the movie of Oz.

The actors will move in and out of these various interpretations, passionately convinced that their own reading is the definitive one, and contesting the authority of the others. The piece conveys the obsession with creating connection, and offers a sense of one door opening into another, tracing the circuitous desire to create a system, however complex, to ‘read’ the world.

The company is at the beginning of a year-long development period, where all collaborators will participate in the construction of the narrative, stage concepts and design, linking The Wizard of Oz with 19th century economic and social upheaval, 20th century political figures, and 21st Century technology.