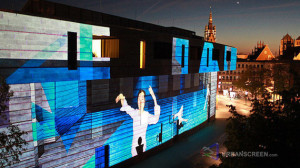 What is URBANSCREEN saying about architecture by creating “the optical illusion of physical transformations”? Is there any commentary embedded in the transformations?

The majority of our works are homages to the concept of the architect, emphasizing a building’s features and extending the perception of its construction. Every artistic method we decide to work with (film, dance, performance, sound, graphics) consistently derives from the architecture we are working on. This approach forms the core of our every production.

As for the use of optical illusion and physical transformation, our intentions offer a temporary shift in perspective, questioning and extending one’s habitual angle on urban space and its characteristic facades. Rather than embedding a commentary through altering the physical appearance of a building, we are aiming to establish an enhanced perception of its layers of construction by revealing a temporary flexibility of the otherwise static architecture.

KREISROT, “BAUHAUS celebrating 90th anniversary” (2009), on the Bauhaus Dessau designed by Walter Gropius
We perceive our stagings as analogous to natural phenomena located within the urban area, rather than as multimedia spectacles. The focus lies within offering a tangible experience of space and architecture.

Our intention is not to establish a direct form of communication that is explicitly addressing the visitor. An installation refers to the architecture and the surrounding space – its form of communication is centrifugal and therefore undirected. The staging takes place by means of the occurrence itself, shifting between experience and depiction in the form of its perception.

Due to the fragile, temporary character of projections, in combination with the physical presence of the architectural surface, an installation gains a very special appeal. On the one hand it embodies a monumental immediacy through its experience and interaction with passersby, while on the other hand its impermanence and elusiveness basically leave no tangible trace of existence.

The phenomenon only persists through afterimages, photographs, and films. The tangible trace of existence is one’s memory and involvement with the encounter. Analogous to the concept of the afterimage in optics, the staging’s persistence is a mental image emerging from the visitor’s interaction with the architecture.

The exploration of the contrasting effects of immediate, temporary, and continuous perception forms the basis of our approach to altering the physical appearance of architecture.