The poetry (and philosophy) of face projection mapping. My interview to NOBUMICHI ASAI, author of the OMOTE project
615

Nobumichi Asai is one of the best known media artist and projection mapping producer. Graduated from Department of Science, Tohoku University. Currently belongs to WOW Inc. Creative/Technical Director/Media Artist. He is globally acclaimed with face mapping for Lady Gaga at the Grammys 2016, “Connected Colors” for Intel’s global campaign, the laser hologram “Light of Birth” exhibited at La Triennale di Milano and “Ghost in the Shell Virtual Reality Diver”. He has led the field of projection mapping both nationally and internationally introducing “OMOTE” and SMAP’s “FACE-HACKING”. He is also invited to media art festivals over the world as a keynote speaker and a judge. His works challenge innovative visual arts by bringing advertisement, design and both ideas of art and programming together. Received Jury Selection in Japan Media Arts Festival, Grand Prize in VFX AWARD 2015, Honorary Mention, Computer Animation/Film/VFX Award in Ars Electronica and many other awards.
WWW.NOBUMICHIASAI.COM
WWW.W0W.CO.JP <http://www.w0w.co.jp/> (http://www.w0w.co.jp/ <http://www.w0w.co.jp/>)
https://vimeo.com/nobumichiasai

Anna Monteverdi: We were all impressed by you project OMOTE, can you tell me which was the original idea to create this real time projection mapping, and what are in your opinion the potentials of its application?
NOBUMICHI ASAI: First I found the potentials of makeup arts and traditional makeup. There are diverse patterns of makeup and tribal face makeup in different countries and in times. Those would reflect their lives and values in places and in times. It is very interesting. And I realised a face could be working as a communication language. It would be very inevitable. People have developed a sort of ‘face language’ from our long history. My idea originated from how I could use the content into visual arts. Maybe OMOTE project can be innovative in that way.

Anna Monteverdi: The face is the place of the largest number of muscles that move expressions and is connected with the inner self. Do you consider this work a sort of “anthropological research” about the religious and sacral theme of the ancient masks?

NOBUMICHI ASAI: Exactly the face is connected with the inner self. It reflects the inner feeling and it is the communication media. It is conscious and unconscious. There is not a single person who has the same personality with others. There is the number of identity same as our population.

It was needed for human evolution to develop complex civilisation and to evolve ourselves. This is opposite to a uniform unicellular organism. In the process of evolution, it was needed to distinguish each difference with their varieties and characters. 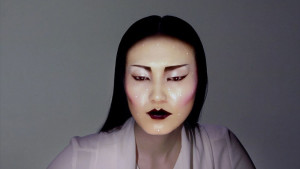 There are differences in faces as many as individuals for identification tags.
Shapes and colours of faces vary with nationality, gender, age, personality, feeling and physical condition. There is no single person who has a same face as others.

At the same time, face language is developed for the need of communication, because we have to communicate our feelings and thoughts between each other for coexistence. I got inspiration from a radical function of faces to pursue the possibilities of face mapping. I don’t know if  it is an “anthropological research” about the religious and sacral theme of the ancient masks. If it has mutual points with my projects, that would be interesting.

Anna Monteverdi. Can you describe it technically, and explain the major difficulty in creating it?

NOBUMICHI ASAI: I receive the texture and the shape of the face in digital format first, and then it is projected with a projector after being processed and animated. The meaning of the face is transformed by this. In principle, this is an extension of the makeup culture of a long human history. It was technically difficult to project the animation onto the moving face. We faced problems with accuracy of positions and latency. If we couldn’t have solved those problems, we couldn’t have made enough communicating and visual effects. We made it possible by using the latest technologies.

Anna Monteverdi. Ologram and laser in Light of Birth: in the introduction to the project you propose a “philosofic explanation”: ” The notion that an object of light exists in space conjures up an image of a ‘substance’ being born” and you quoted Plato’s ‘Theory of Forms’ .Can you explain this statement and how much of these thoughts has inspired your works in general?

NOBUMICHI ASAI: There are questions related to ideas in the base of my works. Questions lie in ‘idea’ and ‘reality’. In programming, we can see them as ‘class’ and ‘instance’. Also it can be seen in the relationship between ‘protein’ and ‘organism’ generated by ‘DNA’. In my perception, essentially ‘information’ is equivalent to ‘existence’.

But information of ‘existence’ is maybe the matrix of 0 and 1, but it doesn’t mean materialism nor atheism. ‘Meaningful matrix’ has ‘life’ and essential ‘consciousness’ inside. For example, if you convert beautiful Beethoven music into 16 bit wav file and make it completely digitise, the essence of the music would not be lost. If you dismantle it into 0 and 1, it doesn’t mean you unravel its essence. If we dismantle human beings into 4 types of DNA, ATGC, it doesn’t mean we unravel human beings. It just shows deeper ‘consciousness’ in inner parts. As science is developed, we have to realise ’something great’ that is invisible in scientific viewpoints. I always look at ’something’ and ‘boundaries between human beings and machines’ beyond technological developments.

One of my work came from this idea is Kagami.

Anna Monteverdi:  When we speak about digital performance, we speak of a  live format in which more and more there is a crescent interweaving of languages, with an impressive presence of  interactive media. what is your definition of technological theater and what you believe is the right direction of a technological theater?

NOBUMICHI ASAI: In short, it can be said as ’the reproduction of the world’. Not just theatres, but also films, literature and arts have visions of how people should be from their real difficulty and tell the stories. That can be said as philosophy and religion. It’s an important process for human beings for mental evolution besides biological evolution. Arts are important for our development. I would say Interactive media let people virtually experience that kind of arts. It is like physical equations in codes execute simulation of a natural phenomenon and reproduce it. Media artists have that kind of desire in their spirits. Eventually, I wonder if people admire an ideal person and a kind of omnipotent god and would like to create one? That is linked to today’s robotics, the development of AI and the mythology of singularity.

ANNA MONTEVERDI: Lev Manovich speaks about the dominant Software culture: do you think this definition fits for your work, and linked to this, can you explain your statement: “At the beginning there was the code”.?

NOBUMICHI ASAI: The answer is clear. It was already mentioned in my previous answers. Previous art works can be converted into data of 1 and 0 as Lev Manovich said. But we have to remember there is ’something essential’ in the code. For example, let’s imagine a human life as a big swirl on the sea. It somehow shows ‘existence which has an energy with force’. But scientific analysis would prove just sea water in a test tube. It would be a fault for digital materialism to hide the ’something’. In buddha’s enlightenment and psychedelic awakening, we experience the universal truth. We can’t say it’s unscientific. In my perception, instinct methodologies is to inductively get answers from a large amount of aspects in life and nature. It is similar to the process of gaining literary truth. Additionally, it is a process of our learning via our experiences. It is just like a process that a computer gains ideas by deep learning. Eventually we could find the original code (which means ’the beginning code’) after massive big data and infinite deep learning.

Anna Monteverdi: In your works you use open source codes like OpenCV. Can you tell us the reasons for this “open attitude”?

NOBUMICHI ASAI: I am driven by the feelings which is similar to the desire of universal truth. Open source codes and physical and mathematical truth in them include ’secret of existence’. Maybe coders are attracted to that and would like to partly experience like a creator.