Directed by ZHANG Yimou, 2047 Apologue made its global premiere in Beijing at NCPA in june 2017.

Chinese director Zhang Yimou who is best known for his movies “Raise the Red Lantern”, “Hero” and “The Great Wall” but also for directing the opening and closing ceremonies of the Beijing Olympics returns to the theater stage with his concept perfomance “2047 APOLOGUE”.

Zhang Yimou has unveiled his latest work at the National Center for the Performing Arts in Beijing. Based on Peking Opera “Sanchakou,” “2047 Apologue” is breaking the form of traditional stage plays, combining Chinese folk art with the latest technology. The show aims to mirror reality, commenting on how science and technology are a huge part of life in the 21st century. The show consists of 8 parts, each combining a traditional chinese craft, music or dance style with modern high tech such as lasers, robots, drones and kinetics.

20 teams and individuals from seven countries will gather in this performance. Radugadesign studio has participated in the show. In cooperation with WHITEvoid team (Germany) and the dance director of London Contemporary Ballet Theatre Rose Alice they have created visual support for dance with kinetic lights installation. 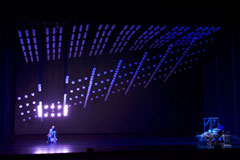 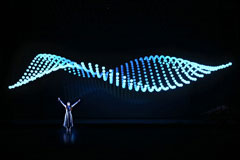 UHD hologram and back projection for visionary director Zhang Yimou by

Combination of live and holographic dance performance.
Shown at Beijing National Centre for the Performing Arts