Rossini’s classic in the production by one of the most exciting contemporary Russian directors, Kirill Serebrennikov – with Tansel Akzeybek as the enchanting lover, Nicole Chevalier as the clever object of his desire, Philipp Meierhöfer as the not-very-bitter rival, and Dominik Köninger as the frantic factotum.

There are strange goings-on behind Doctor Bartolo’s back! Recently, his ward Rosina – whom he plans to marry for her sizeable inheritance as soon as possible – seems to be secretly making new friends. A stranger is seeking to conquer Rosina’s heart with self-composed songs and all manner of cryptic messages. Even Rosina long remains ignorant of the true identity of this mysterious admirer. But one thing is clear – anything is better than being forever chained to the fusty, grumpy Bartolo. And where there’s a will, there’s a way – no matter how strange. 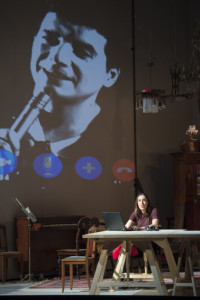 Ever since the première of Il barbiere di Siviglia on 20 February 1816 in Rome’s Teatro Argentina, Rossini’s crazy barber has been racing to and thro – Figaro here! Figaro there! – with uninterrupted verve across the stages of the world. Hard-hearted scheming here encounters romantic yearning for love. Kirill Serebrennikov, the trail-blazing director of his generation in Russia, stages this classic as a modern game of hide and seek where everyone hides from each other and – above all – from themselves.

“Kirill Serebrennikov created a genius adaptation of this comedic opera and transferred it with whatsapp messages, live-streams and hand-cameras into the era of the internet. Extremely fast paced and with so much happening at the same time that even stressed, overstimulated Berliners with an attention span of two minutes can enjoy this play without ever getting the impulse to look at their smartphone. But if you think that the whole opera is just superficial and all about action, let me prove you wrong. First of all, it never feels weird or wrong, that the story is playing in the now even though it was written 200 years ago, nor does it appear cheap and shallow. Filled with so many critical symbols starting with the refugee issue over IS to Conchita Wurst the play really makes you think. It also shows that back then a social platform such as facebook could just have been a barber, or is this just another hint telling us not to believe all the gossip on social networks? The opera also shows what happens if you hold on too tight to the past and that people rarely appear how they really are.”