The 27th edition of the National Theatre Festival is the host of two great names of international theatre: Canadian director Robert Lepage and actor Evgeny Mironov, the artistic director of the Theatre of Nations, Moscow.

The festival audience will have a chance of a dialogue with the two remarkable guests of the NTF 2017 edition, the evening following the opening performance of the Festival, HAMLET|COLLAGE, described by director Robert Lepage as follows: “Ultimately, it is a play about madness, and a one-man Hamlet certainly asks of the performer to put himself in some kind of mad schizophrenic state in order to convey all characters of the play. Lending one’s flesh to all protagonists also gives them some kind of family resemblance underlying the incestuous nature of a play where a brother’s love for his sister exceeds moral boundaries, where a newly widowed Queen weds her own brother in law and where many scholars wonder how a Lord Chamberlain has such easy access to the royal bedroom. This collage is the result of a long series of reflections and conversations between an avid Russian actor and an eager French Canadian director who both had the desire to learn from each other about contemporary stage acting, modern storytelling and Shakespeare and I have to admit that through all this process I have been bedazzled and humbled by such demonstration of courage, generosity and sheer talent on the part of my main collaborator.”

The event Dialogue with Robert Lepage and Evgeny Mironov is designed and moderated by Marina Constantinescu, Artistic Director of NTF. 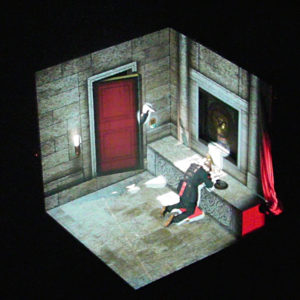