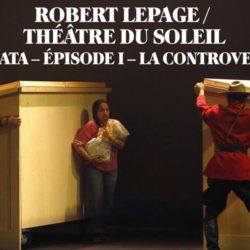 The story of an admiration

There was a time when painters, sculptors, writers, theatre leaders spoke, thought and, without necessarily loving each other, understood themselves. They exchanged their doubts and tremors. Their lights too, sometimes. And even, around a glass or several, some pipes and manufacturing secrets. Rivalry did not exclude companionship. Admiration caused a lucid and stimulating jealousy.
Kanata – episode I – controversy comes from such admiration. Of this long-standing kinship, and now chosen, between Robert Lepage and I, Ariane.
It was simple at first. In 2014, an enthusiastic invitation to work with the actors and technicians of the sun was accepted with all the enthusiasm and, for the first time in the history of the theatre of the sun, the main show, the “Admiral ship” Was going to be led by another director who, since his foundation, had had the honour, the fever and the joy of directing the thirty shows of our troupe (and who, since I am asked, and if the Gods of the theatre give me the strength, intend to continue to do it a few short years again). 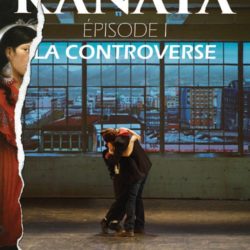 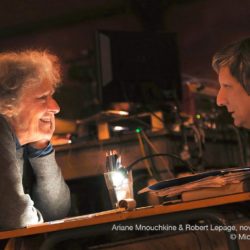 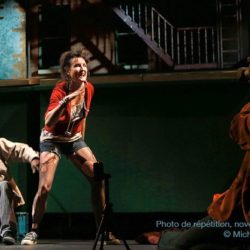 Kanata, so, the show, not the controversy. Controversy, some of you may have heard, which has since been confused and which we will certainly be debating, but which is not the point of this message. This message, even if it is a different tone, is, like all previous letters to our audience, perhaps even more than our previous letters, a call to act quickly.
Indeed, you have always been our heralds. No Poster, no expensive advertising, no journalistic criticism has the same legitimacy or effectiveness as what is called mouth-to-ear. That’s you.

Yes, it is thanks to those of you who come in scouts from the first month, from the first week of representations and who, so far, love our shows and do it immediately and powerfully know that the sun succeeds in doing this Which is for him absolutely vital: to play from the first day in front of a full room.
More than ever, this time we need our heralds. Indeed, the conditions in which the sun is brought to produce kanata are the least that can be said, risky, not to say dangerous. As always, we will say. Yes, as always, but… much more. We will also need sou… No, no support, but witnesses. Witnesses in good faith, honest and sincere, who can say whether or not the show is too. If, yes or no, he respects the essential, written or unwritten laws of the love of all humanity. If, yes or no, he is the lawyer of reconciliation or if, in this chaotic and grinning world that, gradually, desperate people blindly entrust the worst demagogues, he adds division to division, hatred To hate, lie to lie.
I read my message and find him a tone of tocsin that might seem exaggerated to some.
How can we end on a brighter and more faithful note to our deepest feeling, that is, an unshakeable trust in human beings and an unquenchable love for our art, theatre?
Well, once we have reported the loyal and steadfast support of the Autumn Festival in Paris, I think I will leave the word to our “companion” Forever:

” there is a human transespèce, or rather humanimale, a population composed of beings who are of a hospitable nature, the living of a cloth that I find wonderful, still in weaving and mixing. Their nature escapes territorial, National and identity definitions. If they have taken their source in different fences, geopolitics, if they are “born” Afghan, Chinese, miq maq, French, togolese, Norwegian, mapuche, faroese, Khmer, Uruguayan, Ethiopian (to follow…) they have by The suite transported their course across countries and continents. By meeting many others and rubbing their brains to your brains, always exposing themselves, happily, to many others, open to the risk of surprise, they are open, wide, and always in metamorphosis, passing from age to age Sex,-Year-old octogenarians, curious geniuses, time adventurers, resistant in practice to lazy temptations of belonging and own.
They’re not ghosts or people of dreams. They have papers. They get visas. But naturally, they don’t take their papers. More like poems, and still in translation. They listen, they have the greedy ear and the enchanted language. These friends of love rather than hate, you’ll have recognized them, won’t you?
They’re the actors.”

So, once you read this text by hélène cixous, if you care about us, as we care about you, you will find all the information you need.