Polymedia, a technical partner of the Moscow Musical Theatre for the play All about Cinderella, helped to prepare a new production. In the fifth theater season, the company worked on a project to stage a rock-opera version of Fyodor Dostoevsky’s classic novel, Crime and Punishment, in Moscow. Polymedia prepared an innovative solution – 6D video mapping – for the implementation of the director’s original idea.

This production is the first in Russia to use an innovative Black Trax real-time tracking system.

The system allows video mapping on moving objects in real time. Until now, that technology was used only by foreign filmmakers and directors, and brought international fame to such shows as Madonna concerts and performances of Cirque du Soleil.

The project consists of the integration of two complex systems – a tracking system and a video mapping system.

A tracking system tracks the position of the movement on stage and rotating scenery, using special cameras and sensors, then it reads the data about the shape and configuration of the scenery and transmits it to the video mapping system, which, in turn, works on the content online so that the projection onto the scenery is displayed correctly, based on the location and dynamic rotation of the objects on stage.

The total number of projectors on the stage is eight; during the performance the stage scenery changes its position 36 times, and the mapping content also changes 36 times. The integration of such an intelligent system with audiovisual equipment creates a dynamic 3D effect, but, unlike a 3D movie, it performs online, with no need to cut.

“We all became spectators of a unique action, and it is not only the merit of the theater team – a brilliant creative team – but also the team of the Polymedia. Thanks to the Polymedia engineers’ idea the rock- opera of “Crime and Punishment” of Moscow Musical Theatre is one of the most technologically advanced performance in Russia,” – said Alexander Novikov, Director of the Theatre. 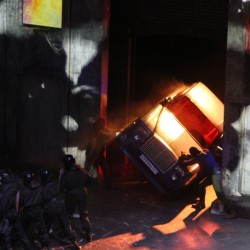 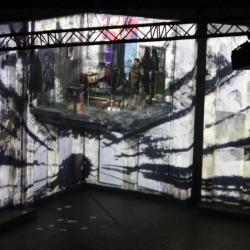 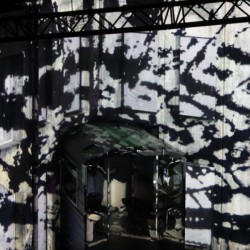 Andrei Konchalovsky went to work on the production of the rock opera in September 2014, calling its format a “poly-genre fusion performance”.

“The rock opera written by composer Eduard Artemyev in 2009 will serve as the basis for the music, and the action will be set in a modern-day city. The opera will be “harsh” and “without the sentimentality of the Dostoevsky novel of which Vladimir Nabokov was so disdainful,” said Mikhail Shvydkoi, Art Director of the Moscow Musical Theater where the musical will be staged. 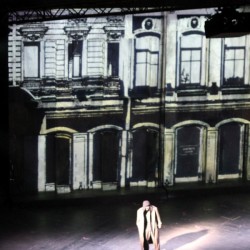 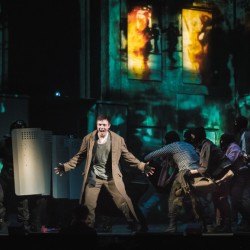 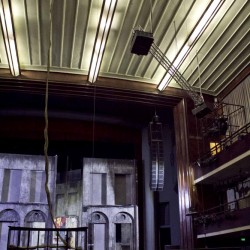