This project was born when Nobumichi Asai (WOW) approached collaborators TOKYO, the dancing duo AyaBambi, and the Ishikawa Watanabe Laboratory at the University of Tokyo.
This project began when songs were created about ‘life,’. Creative and technical director Asai (WOW) and CG director Shingo Abe (WOW) completed visual production and programming based on inspiration they obtained from the songs. Aya Sato added the choreography, and TOKYO completed the project by making it into a video. 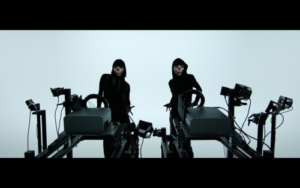 ‘Radioactive’ is the inspiration that Asai felt from music. ‘Radioactive’ wields destructive power, and from that brings ‘death’, ‘suffering’, and ‘sadness”’. And then, the ‘opportunity’ to overcome those things. Accompanied by the overwhelming performance of AyaBambi, a visual synchronization of black tears, skulls, faces being severed, Noh Masks of agony and
the Heart Sutra have sublimated into a single piece of work.
The face mapping system made it possible to follow intense performances, which was impossible until now, thanks to the use of the state of the art 1000 fps projector DynaFlash※1 and ultra high speed sensing. The initial dilemma of speeding up the tracking to the detriment of performance latitude was resolved by the WOW team, Professor Watanabe, and Tomoaki Teshima (EXVISION), who trimmed several milliseconds during a trial and error period that lasted approximately three months, enabling the completion of this system※2. The projected image looks like it is integrated into part of the skin, and the expressions on a subject’s face, when it is distorted or transformed, are exponentially enhanced.

This project is achieved as collaborative work between AYABAMBI, Ishikawa Watanabe Lab,TOKYO, responding the call for collaboration by Nobumichi Asai (WOW).

First, the soundtrack was composed according along the theme “Life”. Nobumichi Asai and Shingo Abe was inspired by the music and then made face mapping work. Aya Sato designed choreography. TOKYO completed the project by making the video work.

The music brought Asai the image of “the radioactive.” The destructive force of the radioactive could cause “death,” “suffering,” and “sorrow.” And “prayers” could overcome them. These subjects infuse AYABAMBI’s powerful performance. Their performance crushes and conquer black tears, skulls and the Heart Sutra. We built up the concept during the production and Abe designed animation for face mapping.

There was a big challenge in technical aspects. We realized the new mapping system that allows us to follow intense performances by using the latest 1,000 fps projector, DynaFlash(*1) and a super speed sensor. It is very new and it had not been done before. Projected images become part of their skin and they transform their faces.

At the beginning of our development, there was an issue, AYABAMBI would loose freedom of performances if we accelerated the tracking speed. Asai, Yoshimura (WOW), Lecturer Watanabe and Teshima (EXVISION) explored how we could keep the tracking speed securing the freedom of performances, taking three months of trial and error to reduce a few milliseconds. And we finally developed this system(*2).

*1 “DynaFlash” is developed jointly by Ishikawa Watanabe Laboratory, the University of Tokyo and is commercialized by Tokyo Electron Device Limited.