Visualia is without a doubt one of the best festival of digital art, light design and videomapping in Europe. It takes place in the Istrian city of Pula (Croatia) in May and his artistic director is MARKO BOLKOVIC,28 years old, lighting designer. The 2014 edition has exceeded all expectations. The organizers speak of ten thousand spectators. Opened with an interactive exhibition of digital artists and performers Adrien Mondot and Claire Bardainne, the festival lasted a long, evocative and unforgettable night.

The much anticipated event was the videomapping on cranes of the port, also called Lighting Giants who were the iconic image of the Festival. Dean Skira, the world-famous lighting designer, with the help of sponsors and workers of the Uljanik Shipyard, has illuminated the shipyard cranes, which are a characteristic symbol of Pula. Lighting Giants have a sophisticated remote control system of lighting and scenography, and can be illuminated with 16 thousand different colors. This second edition of the festival offered light exhibitions, 3D video mapping on historic buildings of the city, two light performances and light installations by Visualia group. 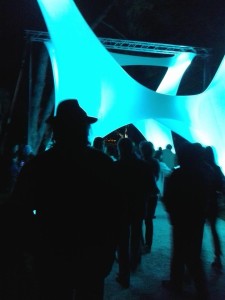 The public was led to various “stations” where they had visual events and places bright led by LED DRUMMERS (UK). A crowd has come to the city from Piazza Porta Aurea, with the first 3D mapping on the Arch of the Sergi and a second mapping on the tower of the Cathedral. Awesome electrified the show (in the name of Tesla) Lords of Lightening (UK), for the first time in Croatia Poetic and full of charm the light installation of the Group Visualia & Igor Vasiljev at the Park Tito. Forms of colored lights in the continuity of space, like a futuristic sculpture.

Could you tell us something about  your personal background in the field of the arts and of the technology?

Well, I started working/volunteering in a alternative theatre DR.INAT as a assistant light and sound technician when I was 13. After that I continue to focus on light design for theatre, and parallel with it I finished SAE Institute for Audio Engineering in Ljubljana. After my collage, I started working as a technical director for different theatre and new media festivals. In 2008. I founded association “Sonitus” which is organisation for audio visual arts. I started with workshops for recording and producing bands, and working electronic music.

Which are your experiences in the field of videomapping and why did you  focus your festival in this sector of the arts?

In 2012. we had a meeting in our organisation and started speaking about the new ideas and projects, and then started the idea for video mapping, since it was something that wasn’t so popular in Croatia. I started talking with a friend Jean Sambolec, who is an 3D artist, and Igor Brenko, the owner of rental company for video equipment Ara Electronic, and we decided to do a 3D mapping project. Since there wasn’t any budget for it, we decided to do the first 3D mapping for free, which we did in March 2013. We were preparing it for 6 months, with a lot of testing on the field and a lot of learning. After that, we were ready to organise the first Festival Visualia, festival of 3D mapping, light design and new technologies.

You are one of the winner of the IAM contexts: which was your project and when will you make it in Girona?

We were really exited when we found out about this project, so we apply and we passed, it was a really big honour. We will do a mapping on a nice old building in Girona, Jean will do the animation, and together we will do music and sound effects. We will finish the project by mid July, and it will be in Girona in start of October, we can’t wait.

Can you tell us  something about the story of the Festival Visualia and in particular this edition?

Well, last year was the first edition, and since the budget was really small, we did everything by ourselves, so there wasn’t any artist outside our group, but it was really interesting, we did 2 big 3D mapping, few smaller with students from our video mapping workshop, and one light performance. This year it was easier in a way since we partnered up with Tourism office of Pula and Archaeological Museum of Istria, and we are really grateful to them, especially to Tourism office of Pula and the director Sanja Cinkopan Korotaj who believed in us and helped us financially and logistically to do this years festival.

The whole idea of this years festival came for the other project of Tourism office which is “Lighting Giants”, the project made by Dean Skira, Uljanik Shipyard, and some sponsors like Arenaturist, Kamgrad,Uniline, Ministry of Tourism, and others. “Lighting Giants” is a project of lighting with LED technology 8 big cranes in our shipyard, and making a nice light performances with music and light, and that was perfect for Visualia. Besides that, we had an opportunity to bring beautiful exhibition of interactive installations from AMCB Company, LED Drummers “Spark!” and “Lords of lightning” from UK,  one new 3D video mapping from Jean and his colleague Anja Ladavac, and a light installation from our Visualia Group together with Igor Vasiljev. We also wanted to do a different kind of festival, so the idea was to walk people from one performance to another thru the old city, with all the street lights turned of, and all of the participants of the festival (audience) got a small LED finger light, so they were also a creative part of the festival. The biggest surprise was the number of people that came to the festival, since we expected around 1000-2000 people, and there was over 10 000 people, which was really overwhelming, but also a good pointer that people really need this kind of festival and arts.

The light and interactive installations were of great impact and technologically innovative; did you personally choose the works in the exhibition, the projects, the artists?

Thanks to internet, this days it’s really easier to find a good performance thru youtube or vimeo. In this case, Jean found this exhibition of Adrien and Claire, he showed it to me, and then I started talking to Archaeological Museum of Istria and their director Darko Komšo, about bringing it to Pula, which wasn’t easy because of the money, but we finally did it, and we are really proud of it to bring such an exhibition to Pula.

How do you organize the works, the selections, the location: have you got big staff?

Basically, we are really small team, since we started from a small organisation, and this is the second edition of the festival. The creative team is mostly made from Jean, Manuel (our technical manager, and LED technologies enthusiast), and me, my wife Ivana is working on writing projects, Facebook, and that kinda things, our Visualia group for our other projects and experiments ( Mia, Saša, Linda, Daniel). Basically, somebody find some interesting performance on internet, or some DIY project that we would like to experiment with, and that we try to do that. We had a lot help from the stuff from the Tourism Office and Museum, but we hope we will expand our little team in next years. 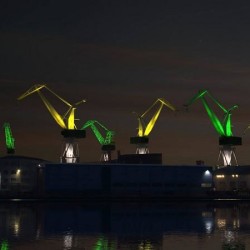 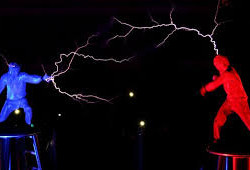 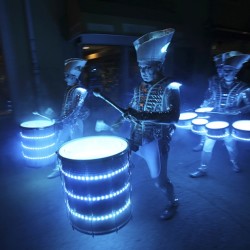