He started his career as media artist and designer in the early 90s. His work has been shown at Ars Electronica, Transmediale, and theatres like Volksbühne Berlin and Cultural Centre Hong Kong. He blends media art and design with traditional art forms like theatre, music and sculpture. 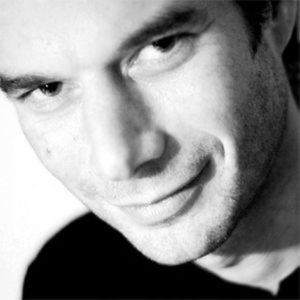 INTERVIEW:
Anna Monteverdi: You use 3D animation, digital technics, videomapping applied for several art forms: theatre, music and sculpture. Which are your method of work for this kind of digital intervention where other artists are involved in the same projects?
Tobias Gremmler: Every project is like a new exploration. Many of them are commissions, which often leads to new, exciting collaborations. The interaction with other artists as well as the creative method and technology depends on the nature of the project. Some projects deserve very close collaboration while others are done without much communication.

Anna Monteverdi.We were astonished by your animated scenography for the recent chinese theatre show in which technoloy has a very liquid dialogue with natural elements and with the actor. It offers a real immersive environment.
Can you describe this experience, also from a technical point of view? Was it a interactive scenary? Which was the starting point?
Tobias Gremmler : The director (Tim Yip) wanted to tell the story without drawing a too concrete picture. The visuals should trigger the imagination of the audience rather than being consumed. Thus, the visuals appear often incomplete or hiding something that needs to be imagined. For example, the dragon is mostly invisible, covered by smoke. But as its motions become expressed through the turbulences of the smoke, one can imagine the movements behind it. The smoke becomes a medium that abstracts a scene and propagates it wider into space. Similar methods are used with bamboo and stone. This elements serve as media that translates the underlying scenarios.

Every medium has a different degree of intimacy that determines the individual freedom of interpretation. When you read a book, all voices and images appear in your own head. They come to existence through the imagination of the reader. Thus, each character in a book has as many different voices as readers. In cinema, the space for imagination is more constrained, as the voices and visual appearance of the characters are already predefined. Although I am working with a visual medium, I often introduce elements of incompleteness in the sense that it encourages the recipient to complete it with its own imagination.

Anna Monteverdi What is nowadays the role of the digital in the contemporary theatre? Could it completely transforme the traditional stage?

Tobias Gremmler: Theatre is an art form that continuously absorbs new disciplines, technology and trends. Nowadays, every big theatre or opera house has a stage projector. When I was suggesting this twenty-five years ago, directors argued that this will turn theatre into cinema. Obviously, that didn’t happen. Theatre needs to stay open to integrate technology that already impacts our society. Otherwise it loses its relevance. That will not change the core aspects of theatre but keep them alive. The constant flexibility and transformation of theatre is a necessary precondition to establish a stage that reflect the current society.
Anna Monteverdi ABout FACE VISUALs. The projection on the face of the artist is perfect. Is it live or a postproduction effect?

Tobias Gremmler: In “Face Visuals”, the face was mapped on geometry, which is vice versa than the work you referring. Till a certain degree, the technology is similar to projection mapping, but not real-time. I wanted to extend the visuals beyond the shape of the head, which would not be possible when projecting on a face. I’ve used similar technology more than ten years ago, so there was no need for getting inspired by Omote, although it’s a fantastic work. Apart from technical aspects, the visuals telling the story of fragmenting a persona along with the lyrics of the singer. Thus, the technology primarily serves an artistic expression.

Anna Monteverdi .You always blend music, visual art, 3d as for the London SYnphony orchestra in which the movemente are visualized the cascade of colors and lines, as Kandisnsky imagined in the avanguarde period.
Which are you goals in these productions? To produce to the audience a sinesthetic experience?

Tobias Gremmler:Back in the early 1990s, I composed music for several theatre pieces. The methods of creating music are very similar to those I use now for creating a visual composition. Both media including aspects of rhythm and patters, contrast, variation, etc. There is an inherent coherence between both disciplines that I try to express. Through that expression, the boundaries between the disciplines starting to dissolve. It is actually this process of dissolving rather than merging that interests me. It unveils a certain structure that exist beyond the media that carries

Anna Monteverdi Why  theatre  (and especially Chines theatre) is at the centre of your research in the digital art?

Tobias Gremmler: Chinese theatre particular interests me because there are no gaps between singing, dancing and acting. Most of the performers have skills in all disciplines and can seamless blend between them during a play. In contrast, western theater is strictly divided into opera, dance or drama, and the performers are specialized in one of this disciplines.

When I composed music for theater, being in my early 20s, I got in touch with disciplines such as dance, lighting, costumes and stage design. I learned that each of this disciples has an almost equal impact on the final piece as the expression of a scene can be altered complete just by music or lighting. I was fascinated by this interaction and it had a huge influence of my later work. Even if I mainly focus on visuals now, it still contains aspects of lighting, dancing, costume and stage design.

There is a high degree of abstraction in Chinese theater. Every gesture, eye movement, costume color or pattern has a specific meaning, like a highly elaborated system of visual design trough witch information is encoded. As a foreigner, I have a natural distance toward this system which allows me to analyze it from a different perspective, although I found some aspects deeply resonating. There is a universal core in each theatrical expression, independent from its cultural encoding. We all feel happiness, sadness, curiosity or anger. It is just expressed differently through different cultures.

For example, in some of Robert Wilsons works one can trace a relation to Chinese theatre. The methods how information is encoded visually is somehow similar. I am not referring to the visual style but rather the visual language. In my collaborations with Chinese performance, I extract aspects of its visual language and reconstruct its grammar in a way it becomes readable across different cultures without losing its inherent meaning.