Anna Monteverdi teaches History of the Performing Arts at the Academy of Fine Art in Lecce and unitl 2015, Multimedia Drama at the Brera Academy. She is an expert in Digital Performance, has published several books, essays about videomapping and theatre, interaction design for theatre, curated exhibitions and cooperated with many artists. She curated the first Italian edition of dramas by Jeton Neziraj from Kosovo (Cut up Publishers). She is specialized in the theatre of the Canadian director Robert Lepage 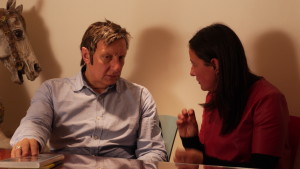 The video New Theatre in Kosovo (2015) made by Anna Monteverdi during her six trips to Kosovo, is based on the play The Destruction of the Eiffel Tower by the brilliant Kosov playwright Jeton Neziraj, directed by Blerta Rrustemi Neziraj, with music by Gabriele Marangoni, which debuted at Prishtina at the end of 2013 and seems to predict the tragedy of “Charlie Hebdo”. Footage of the rehearsals is combined with a series of interviews and images of the city with its contrasts and its suffering.