Written by a Kosovar cynic

THE ‘TONY BLAIR’ SLAUGHTERHOUSE IN PRISHTINA

After Great Britain’s tragicomic exit from the EU, the empty space has to be filled quickly, otherwise the EU might collapse.

Europe has turned its eyes on Kosovo, which unexpectedly finds itself facing an historic opportunity, which it must exploit. But, as always, it comes with a huge challenge. In addition to Kosovo, Serbia also has the chance to enter the EU.

People and animals in Kosovo mobilise to meet the standards that Europe has set as a condition of entry, and to do this better and faster than Serbia.

The basic EU document that is given to the Kosovar authorities  is called Kosovo and 3,000 easy regulations on the way to Europe. 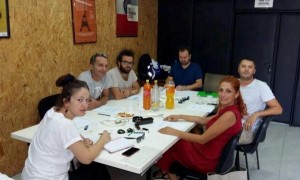 The Tony Blair Slaughterhouse in Prishtina, from now onward, must start to sell meat which has been quality-controlled. In their effort to meet this condition, the owners of the slaughterhouse make a Kafkian journey through the state bureaucracy, dealing with officials and bureaucrats who are unhelpful  and corrupt. They even have to steal a giraffe from the Skopje zoo for the prime minister of Kosovo to eat on his birthday.

And while some people in the new country naively commit to this new challenge, the Orwellian world of animals mobilises and wants to exploit this political momentum to set out and articulate their demands for more dignified slaughter.

Written by a local cynic, this play is a tragicomic panorama of the current Kosovar and European reality. Kosovo’s sincere aspiration to join the EU is confronted on the one hand by confusing and ridiculous European regulations and requirements, and on the other hand, by the ruses of bureaucrats who care only about making things ‘look okay on paper‘.