Miguel CHEVALIER The Origin of the World 2014 Shanghai

“Digital Arabesques 2015” revisits the Moroccan artistic tradition via the medium of digital art as it spreads out across the floor like a huge light carpet in Derb Lâalouj, Essaouira (Morocco).

The piece features evolving multicolored digital scenes composed of ornamental patterns in reference to the art of zelliges, arabesques and mosaics, as well as the world of “Mashrabiya” (latticework). “Digital Arabesques” shows sophisticated geometrical patterns based on overlapping lines driven by mathematical logic. These moving patterns create a wave that forms and deforms to infinity to reveal a colorful living universe that is constantly renewed. This artwork is interactive through the use of infrared sensors. When the viewers interact with the piece they create disturbances under their feet in the trajectories of these mobile, interlaced patterns and new surprising compositions emerge. The result is an unprecedented interactive and visually immersive experience.
This creative work harks back to the idea of the trompe l’oeil technique in art, disturbing the perceptions of visitors while creating the sensation of a shifting floor or wall that loses its shape and moves. The reference here is to the great Kinetic Art and Op Art artists such as Victor Vasarely, who conducted the research into movement and optical illusion which predated the digital art of today. 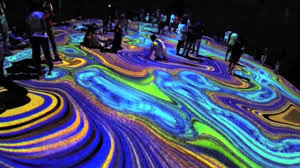 In the art of zelliges, Miguel Chevalier discovered a decorative manifestation similar to his own language as well as a connection with digital algorithmic art in its characteristic use of the geometry of forms and mathematical laws. Miguel Chevalier enhances these features by the use of computer software to enrich the designs in the realization of his piece. In this way, Islamic art finds a natural connection with algorithmic and digital art.

In the same way that the zelliges of Morocco develop from floor to ceiling, “Digital Arabesques” covers the floor or the wall with vivid patterns reminiscent of this colourful land where the sun is omnipresent. Miguel Chevalier’s artwork transports the viewer to a world of kaleidoscopic constellations and plunges us into the magical universe of “One Thousand and One Nights” and flying carpets.